November is National Recycling Month. In Edgerton, for just about two years, residents have been able to use large green totes to collect all their recyclable materials – a mix of plastic, glass, aluminum, cardboard, and paper.

Norm Van Dyke, owner of Van Dyke Sanitation in Edgerton, says that the program has been going very well. For over a year after the totes were delivered, he would go around towns and check what people were putting in their big green totes – because many people forget, or just don’t care – to make sure they are only putting recyclable materials in that bin.

Some things – like styrofoam food containers – seem like they should be recyclable, but they are not. Neither are packaging peanuts or the plastic bags that are sometimes used to cushion items in shipping.

Norm says that even now, after two years of trying to educate people – they still have residents who will stuff a bag of trash in the recycling bin when their garbage tote is full.

“There will always be ten percent of the people who have to make a problem,” he said.

Norm explained that because Van Dykes is a small family owned company, they take the time to look over their recycling before they drop it off at Millennium Recycling in Sioux Falls, the destination for most of the recycling materials collected in Pipestone County. Brad Van Dyke, who primarily runs the recycling truck, said that he regularly looks in the bins before he dumps them into his truck. When he finds things that don’t belong there, he tags the tote and does not pick it up. 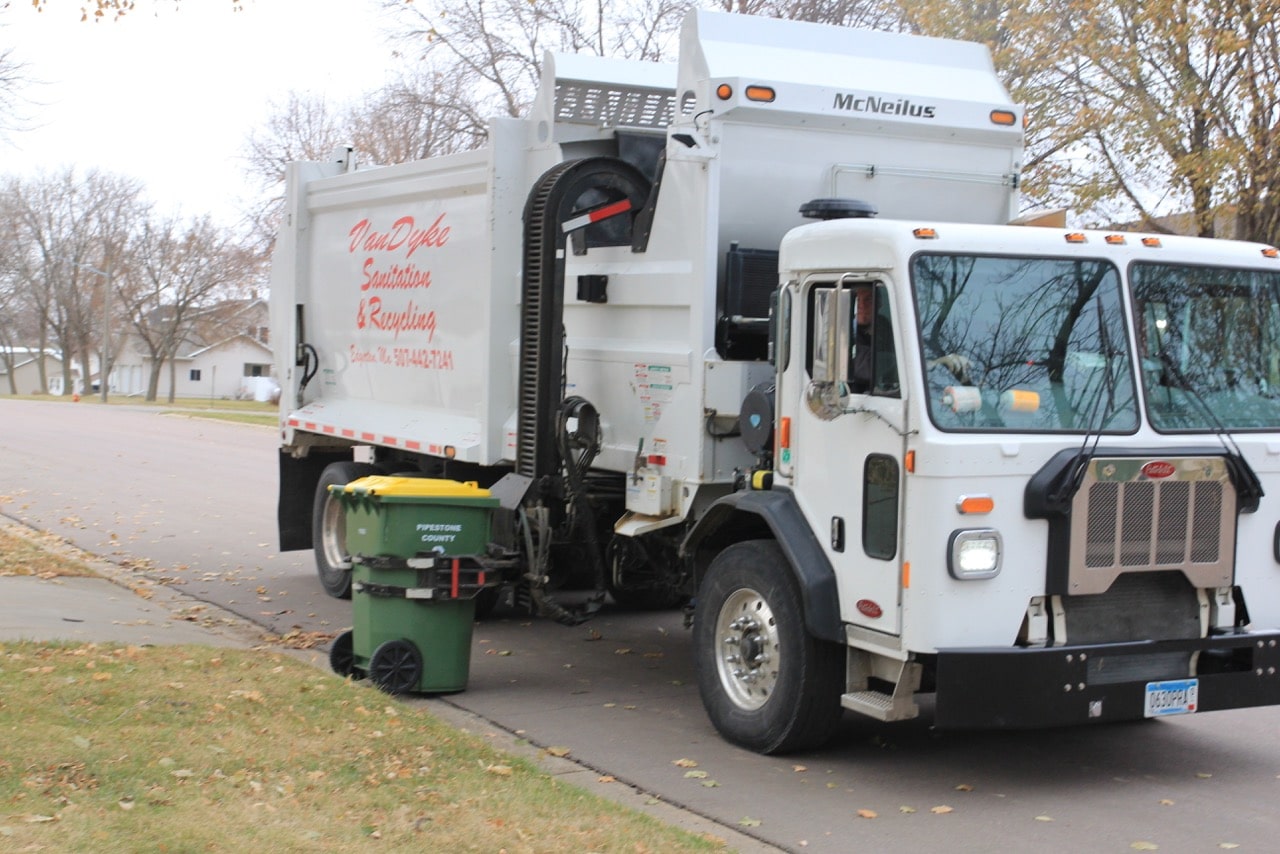 Brad Van Dyke picks up recycling in Edgerton last week Tuesday. He drives from the right side of the truck, so he can pull up to recycling totes and look at what is inside before he empties the bin into his truck. Some people put trash and other non-recyclable materials in the green recycling totes.

By and large, the single stream program is going really well. In 2019, Pipestone County recycled 736 tons of residential material. That was up from 485 tons in 2018.

In 2019, paper was the most recycled product in Pipestone County. Up until about a year ago, most paper in Edgerton was being collected by the Edgerton Volunteer Fire Department and was recycled into insulation. However, the fire department no longer does this as a fundraiser because the place that bought the paper cut the price. It was not worth the effort the firemen were putting in sorting the paper and boxes and garbage that inevitably ended up in the trailer.

In Pipestone, the Boy Scouts still recycle some paper products. They own a parcel of land by Pipestone Grain where they have a shed and two semi trailers where they collect paper.

According to Van Dyke Sanitation, it costs them $40 per ton to recycle and $51 per ton to haul to the landfill. So it is less expensive to recycle, but it’s not free. Pipestone County residents pay for recycling on their property taxes. In 2020, that cost was $36 for the year. Van Dyke Sanitation picks up residential recycling in Edgerton and Pipestone alternating Tuesdays. Ruthton, Holland, and Jasper are picked up every other Monday, and Ihlen and Jasper are picked up on every other Thursday.

Last week when Van Dykes picked up recycling in Edgerton, they ended up making two trips to Sioux Falls rather than one because there was so much to be picked up that week.

So more people are recycling more things, but we have a long way to go. Minnesota posted a combined recycling rate of 46percent in 2018, which was the highest rate since the inception of SCORE in 1991. SCORE stands for Select Committee on Recycling and the Environment. It is an annual examination of Minnesota waste management programs and data. In 2019, Pipestone County reported a total of 2,136 tons of material recycled in the county. That total includes residential and commercial/industrial recycling.

According to the U.S. Environmental Protection Agency (EPA), the total municipal solid waste (MSW) recycled in the United States in 2017 was 67.2 million tons, with paper and paperboard accounting for about 66 percent of that amount. Metals comprised about 12 percent, while glass, plastic and wood made up between 4 and 5 percent. That seems like a lot of recycling – until you consider that on average Americans generate about 5 pounds of trash per person, per day – about 267.8 million tons per year.

“There has been a significant increase in participation countywide with recycling,” said Pipestone County Environmental Administrator Kyle Krier. He explained that single stream may not have increased recycling in Edgerton as much as it did in other towns, but there has been an increase throughout the county. 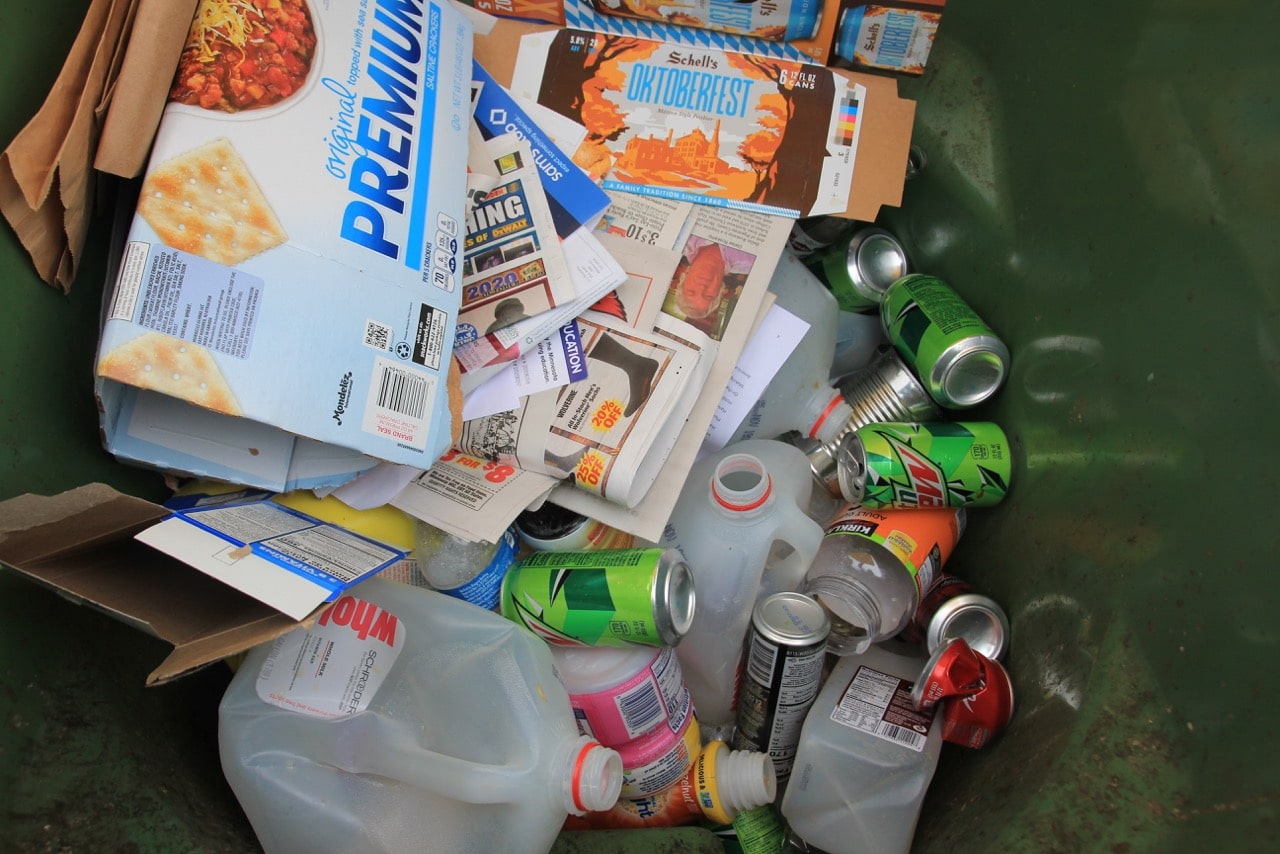 Paper, plastic, and glass products can all be mixed in single stream recycling. The items are sorted mechanically at the recycling center.

When sorting was required, there was low curbside usage in Pipestone. Holland, Ihlen, Trosky, Hatfield, and Woodstock did not have curbside pickup before October 2018. Many people used to self-haul  to the recycling sheds that are located in each town, but technically, those sheds are for rural residents who do not have the option for pickup.

Van Dykes is also picking up cardboard from businesses each week, so that has also raised the recycling rate in the county by about 100 tons per year

Share this post:Garbage Has Been Increasing in Recycling Loads! What’s the problem? We’ve been seeing a concerning...

Share this post:How to recycle metal cans in Sioux Falls. Millennium does NOT pay for aluminum cans...

Share this post:  A Guide to Recycling and Garbage Service in Sioux Falls Are you new to...

Share this post:Why should we recycle in Sioux Falls? Burying or burning trash may seem like an...

Share this post:It’s no secret that businesses across the country are struggling to find workers. The solid...

There are 0 comment. on "Wading through single-stream recycling (Edgerton Enterprise)"

Share this post:Recycling really does work in Sioux Falls… and is an ESSENTIAL part of our community! First, let’s...

Share this post:PLEASE KEEP POLITICAL SIGNS OUT OF YOUR RECYCLING BIN! Political signs are usually made from durable materials...

Share this post:Halloween typically ends in big, scary piles of waste. Follow these tips for proper disposal in the...

Share this post:When placed in your recycling bin, the Dirty Dozen (listed below) can really hurt the recycling process....